In The World Of 10 Young People, Nearly 4 People Own Houses And How Is Vietnam? The HSBC Group has conducted a survey of the millennial generation (or Generation Y, only those born between 1981 and 1998) globally for their generation-to-generation behavior.

Accordingly, owning a house is not necessarily a dream out of reach. However, slower wage growth and rising home prices are now the main barriers to delaying home purchases.

According to a survey of more than 10,000 people in 10 countries, on average, nearly 10 in every 10 young people (38%) have their own homes. For those who do not currently own a home, 81% of them plan to buy a home within the next five (5) years, although this varies widely between countries. 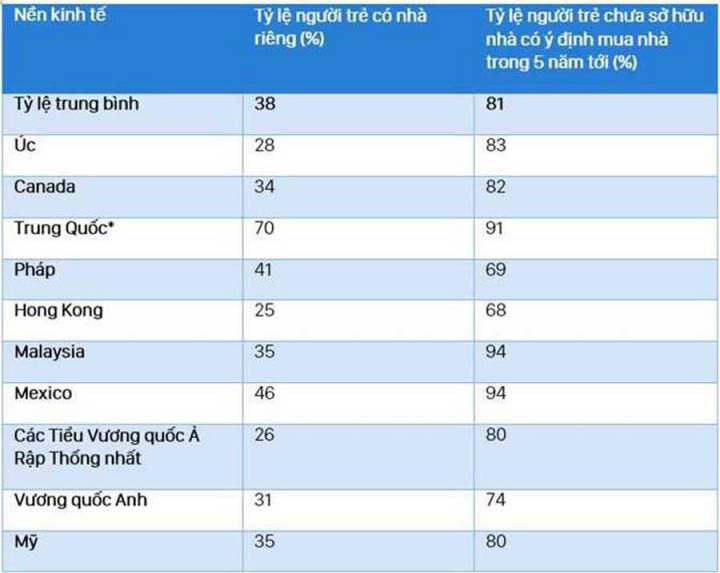 Even so, young people still face significant challenges related to affordability. This is reflected in the fact that 69% of those who intend to buy a home say that they have not saved enough money for the first payment, and 39% say they are unlikely to buy the type of house they want.  Except for the United Arab Emirates and Hong Kong, in the remaining eight countries, house prices are rising in 2016.

62% of young non-homeowners say they need higher salaries to buy a home, which suggests that not everyone can achieve their goals. Except for China and Malaysia, the rest of the countries expect a real wage increase of less than 2% in 2017.

Commenting on the report, Louisa Cheang, Head of Personal Financial Services and Asset Management, HSBC Group, said: “Nearly 40% of young people surveyed have their own home. Proving that the dream of owning a home for young people around the globe remains promising. However, that dream will be delayed for young people in struggling countries at the same time as slow wage growth and rising home prices. “

The survey also found that a minority of young people do not have a good financial plan for their home purchase goal. Of those who have not yet owned a home and intend to buy a home within the next two years, nearly a third (30%) admit that they have not imagined an overall budget and about 55% butter.

It is therefore not surprising that 57% of young people who have bought a home over the last two years say they have exceeded their budget.

On the other hand, young people who participated in the survey also said they are willing to consider sacrificing some things for home purchase. 56% of non-homeowners said they would consider cutting entertainment costs and 35% would consider buying smaller than expected homes, even 20% ready to postpone giving birth.

Parental support also plays an important role in the savings plan to buy young people’s homes. About 35% of homebuyers said they had resorted to “Parent Bank” for their home purchase budget.

Meanwhile, in Vietnam today, HSBC’s report shows that demand for homeownership is rising as the country is in a period of “golden” population and rapid urbanization. Nearly one-third of the population (32.8%) are between the ages of 25-45 and half of them are young.

The urbanization rate of Vietnam is 35% in 2016 and is expected to reach 40% by 2020, which means that economic centers such as HCMC, Da Nang, Hanoi and Hai Phong will become home to some 36 million people over the next four years.

According to the HCMC Real Estate Association. Ho Chi Minh City (HoREA), in the city each year more than 50,000 newly married couples, resulting in high demand for housing. However, just like young people globally in HSBC’s survey, their ability to buy a house is also limited by rising house prices and lack of proper financial planning.