Kinh Do TCI And “Record” No One Wants To Own There are 6 real estate projects being implemented in Hanoi, all 6 projects are facing scandalous problems. The record that no one wants to receive this belongs to the Kinh Do TCI.

Since the project has finished…

The petition, a reflection of many residents of the project Capital Garden, 102 Truong Chinh, Thanh Xuan District, Ha Noi by Kinh Do Hotel Co., Ltd. (a member of Kinh Do Development Investment Corporation – TCI Group) as investor sent to the newspaper. This is a project consisting of two 25-storey buildings, which will be handed over to customers from the end of 2016.

After more than half a year of living, residents of Capital Garden repeatedly denounced series of violations of the investor. In particular, the fire occurred on the 15th floor of the Capital Garden apartment building on May 31st, prompting residents to worry and worry about their lives.

Previously, in December 2016, the investor bought the apartment into use while the fire protection system was not accepted; Firefighting equipment and tools, such as automatic smoke detectors, automatic fire sprinklers, coil sprinkler hoses, etc., are available; Exit doors open in both directions (from inside and outside); Exit stairs do not number the floor…

Talking to reporters, representatives of some residents living in the apartment said that residents have been living here for more than 6 months, but have never been rehearsed fire, leading to the occurrence of fire trouble everybody screams panicked, each one running in a direction, causing the scene to become extremely chaotic and dangerous.

In addition, residents also reflected, the elevator system has not been tested and has not been stuck with inspection stamps in accordance with regulations, but has been put into use. In the process of using, elevator falls free and trapped people for tens of minutes, causing anxiety for residents. When a fire occurs, the lift is also not activated to return to floor 1 and stop operation.

The mood of the residents of Truong Chinh is similar to that of the residents of Kinh Do Tower, 93 Lo Duc is also owned by Kinh Do TCI. The project was started in 2003, officially in 2008, is the first luxury apartment building in Hai Ba Trung district, Hanoi with 27 floors.

However, after being put into operation, the apartment building was a lot of scandals when the owner transformed the top floor into a bar and an apartment for sale. While by design, this is the greenery area, relaxing of the population.

Not to stop there, Kinh Do TCI also transformed cellar B1, B2 into a parking space for the offices in the podium and not allow residents to send cars. Even then, the residents of Kinh Do Tower have been fighting for protection when the owner arbitrarily builds a technical room in the common space between the floors.

…to the pending projects

Unfortunate as the Kinh Do Tower and Capital Garden, many buyers of Discovery Complex 2, 8B Le Truc, Ba Dinh District, Hanoi are still standing idle when the project is ready to be completed and put into operation. At the handover, the authorities discovered, forced to cut the tops due to violations of construction permitting from September 2015.

According to the test results of the branch of TP. Hanoi, 8B Le Truc has many mistakes. Specifically, according to the license, the construction is 53 m high to the top of the trunks, but the investor has increased the height of the floor, built on the 19th floor, the current total height of about 69 m (over 16 m, 5 floors). The floor area under the construction permit is nearly 30,000 sqm, however the investor has built about 36,000 sqm, up over 6,000 sqm compared with the license.

Violation of the construction of the project was later considered by the authorities to be serious, affecting the shape of the building and space architecture and must be dismantled. After the dismantling of phase 1, the progress of phase 2 of the 8B Le Tru project has not been progressed due to the fact that the Northern Group Joint Stock Company Home) has a written proposal to the City People’s Committee in Hanoi proposed to phase out dismantling construction phase 2 for the reason more than three months, consultancy unit Consulting University of Construction has not proposed the possibility of dismantlement, feasibility absolute for the building.

The same name with the Discovery Complex, project at 302 Cau Giay Road, Cau Giay District (Hanoi) is also being prosecuted for many violations of construction floor.

Initially, the project named Trade Center No. 302 Cau Giay was serviced by Hanoi General Commercial and Service Company (Servico Hanoi). In mid of 2012, Kinh Do TCI takes over and names its new Discovery Complex. Then, Kinh Do TCI adjusts the scale of the project from a 35-storey tower into two 38-storey (office) and 50-storey (38-storey) towers. 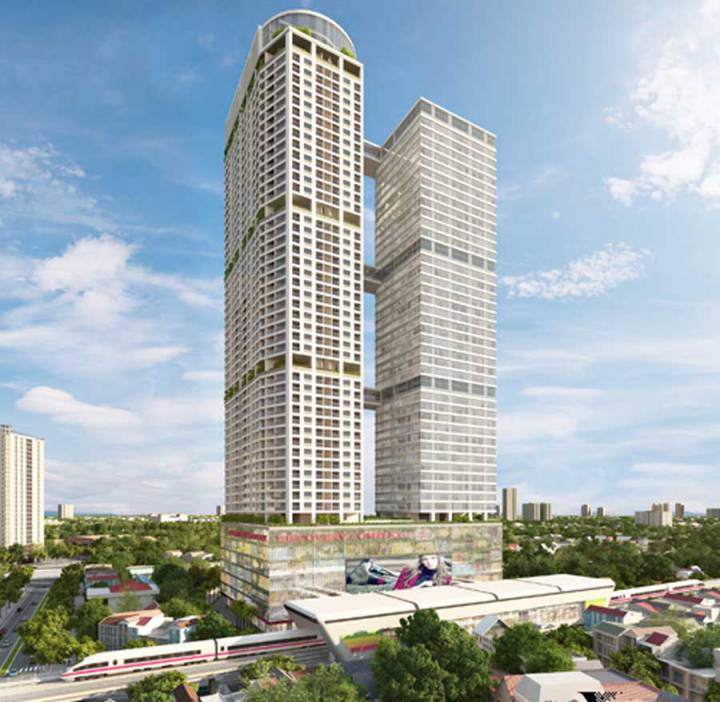 However, in the course of construction, the investor has built more blocks of up to 8 floors and 1 floor of trees, exceeding 3 floors compared with the building license. Violation at the Discovery Complex Project 302 Cau Giay just began to “reveal” in October 2015, the same time the project 8B Le Truc, causing public opinion “up wave”, due to serious violations.

The project was also suspended by the authorities for some time and was restarted recently.

And even the hanging projects

In addition to the above four projects, Kinh Do TCI also has plans to implement Hoang Quoc Viet Tower, located at the junction of Hoang Quoc Viet Street and Pham Van Dong Street. The project consists of two towers, including a 46-storey office tower and a 50-storey apartment building with 5 basements, 5-storey of a commercial center, 4 floors of trees and utility.

Despite its prime location, close to the Ministry of Industry and Trade’s building and facing the Ministry of Public Security, the project is still in a state of reclamation for many years.

On the outskirts of Hanoi, Kinh Do TCI owns the X1 Building (Tam Hiep Commune, Thanh Tri District). The project has a total land area of 9,885.7 sqm of which the planned road area is 3,053.8 sqm, the area of public greenery landscaping and ecological environment occupies 2,735 square meters and housing area occupies 4,096,9 sqm.

The project was built with 16 adjoining villas and a 15-storey apartment building, including 1 basement, 2 supermarket floors, 2 office floors and 11 apartment floors with 110 apartments ranging from 84.3 – 141.7 sqm/unit.

Expected, the project will be officially kicked off in the fourth quarter of 2012, but the project is still inactive.