In this article, Vietnam Real Estate will go through the “oldest” schools in Vietnam, throughout the North and South for readers to have more information about the history and development of the school.

Saigon University, the precursor of the College of Pedagogy of Ho Chi Minh City is considered the school with beautiful architecture and old style in the system of universities in the city. The school has both ancient French and interwoven Chinese architecture built in 1908, called the School of Charity (French-Chinese High School).

Currently, Saigon University organizes training for 30 majors at the university level, 24 majors at the college level, and four majors in the fields of economy, technology, culture and society, politics – arts, and pedagogy.

In November every year, Marie Curie High School hosts a night of traditional music with many famous singers for two purposes: to create a playground for students and to raise money for charitable activities.

Le Quy Don High School (Ward 6, District 3, Ho Chi Minh City) was built in 1874 and completed in 1877. Initially, the school was named ‘Chasseloup – Laubat’ (Collège Chasseloup – Laubat) to serve the need to train the children of the French colonialists in Saigon. The National Curriculum, from elementary to baccalaureate (French program).

With the classic French architecture, Le Hong Phong School is the pride of many generations of students not only by beautiful architecture but also the place to train many talents for the country, where many patriotic movements took place. During the resistance war against French and American.

In 1902, Indochina Medical University in Hanoi was officially established. The first principal of the school was a well-known physician in the world and very familiar with Vietnam: Dr. Yersin. From 1902 until 1945, the principals were all French and the school was run by the University of Paris, the language of instruction was French. After the revolution, on November 15, 1945, the University of Medicine and Pharmacy of Vietnam opened its first school year under the administration of the Democratic Republic of Vietnam. In 1961, the University split into two schools of Hanoi Pharmacy and Hanoi Medical University.

In the process of existence and development, the school has trained generations of doctors who have made outstanding contributions to Vietnamese medicine such as Vu Dinh Tung, Ton That Tung, Hoang Dinh Cau, Pham Ngoc Thach and Dang Van. The achievements in the fields of cardiology, malaria, liver surgery … associated with the names of professors Ton That Tung, Dang Van Ngu, Dang Van Chung … It has made the world to know to the medicine of Vietnam.

In 1906, Governor General Indochina Paul Beau decided to set up the Université Indochinoise. In 1907, Indochina University officially opened the first course. This is the first institution of higher education in Vietnam in particular and the Federation of Indochina in general at that time. Immediately after the opening of the first course, in which the school encouraged the patriotic movement in 1908-1909, the French had cut off the budget and halted its operation for nine years. The school only came back when Albert Sarraut made Indochina Governor General in 1917.

Officially established in 1955, but perhaps the history of the Viet Duc school dates back to 1897, with the birth of a school called Puginier. After the liberation of the capital (10/10/1954), the school was named Secondary School Level 2 – 3 Hanoi. By 1970, it was divided into two schools, namely Viet Duc High School (morning classes) and Ly Thuong Kiet High School (afternoon classes). In 1977, two schools on the merger of high school today.

At this time, Viet Duc is always at the top of the excellent schools of Hanoi capital. This is also the place where many famous people are trained such as Chairman Nguyen Sinh Hung, Deputy Prime Minister Pham Gia Khiem, Professor Ton Do Bach, Doctor Tran Tien, Poet Luu Quang Vu.

There is one high school in Hanoi with a long tradition such as Chu Van An High School. The school, founded by the French in 1908 (106 years old). Initially, the school was named the Secondary School of Protection, but the Hanoi people often called it Pomelo School because it is located in the Pomelo region and also expressed the patriotism of the students at that time. Although set up to train staff for the ruling apparatus, many of the school’s students became elite revolutionaries. General Vo Nguyen Giap has also taught here.

By 1945, the school was renamed Chu Van An – a famous professor in the Tran dynasty. At present, Chu Van An High School is located at No.10 Thuy Khue Street, right next to West Lake and still preserving the unique architecture from the French time.

Like Chu Van An High School or Phan Dinh Phung High School, this school is always shady and special, retaining the ancient architecture that is hard to find today in high schools in the city.

Phan Dinh Phung High School was established in 1923 with the initial name of the École Normale Supérieur Do Huu Vi – the first pilot of Indochina.

During the French colonial era, the school’s name was comparable to other famous high schools such as Buoi School, Dong Khanh School. Currently, the school still remains stature as one of the top high schools of Hanoi with the highest enrollment points in the city.

In 1896, the school was established under the instruction of King Thanh Thai and signed by the Governor of Indochina. At the beginning, the school was named “France National Academic School”, then named École Primaire Supérieure, Khai Dinh, Ngo Dinh Diem and returned to its original name in 1956. In the beginning, The study was built in the old style, the mud wall with a total of three buildings. By the early 20th century, the school was rebuilt in French architecture.

In March 1879, under the permission of the governor of Nam Ky Le Myre De Vilers, My Tho Province was authorized to establish a secondary school named ‘Collège de My Tho’. 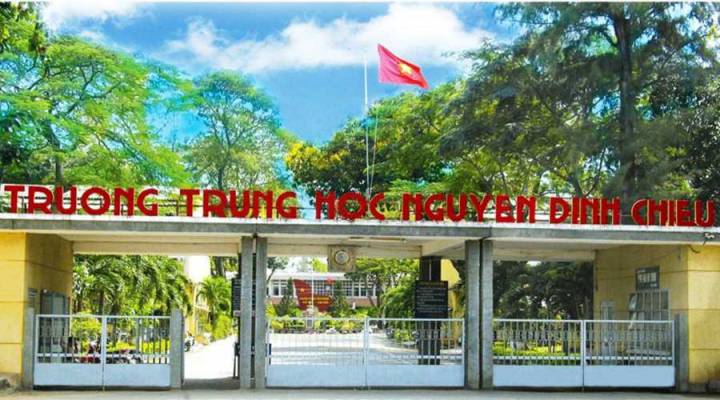 The precursor to the ‘École Primaire’ elementary school, at its inception, was rather poorly built, in addition to the office and a laboratory, which housed only a single story building, Sleep for students on the floor. In 1953, the school was renamed Nguyen Dinh Chieu High School so far.

Prior to April 30, 1975, the school changed its name several times (4 renamed): Collège de Can Tho, Phan Thanh Gian Secondary School, An Cu 1 Secondary School, Can Tho High School. By 1985, the school was named martyrs Chau Van Liem. At present, Chau Van Liem High School has been recognized as national standard and is the only high school in Can Tho province to apply the program of two sessions.

In the history of development, Ngo Quyen High School has been renamed 3 times. French Period, the school name is Bonnal. After the August Revolution in 1945, the school was renamed Binh Chuan. In 1948, the school was named the national hero of Ngo Quyen and kept until now. This is the oldest school in Hai Phong, bearing bold French architecture.

Famous people who have studied at this school are Nguyen Van Linh (former General Secretary of the Communist Party of Vietnam, who initiated the renovation of the country), musician Do Nhuan, poet The Lu, writer Nguyen Huy Tuong …